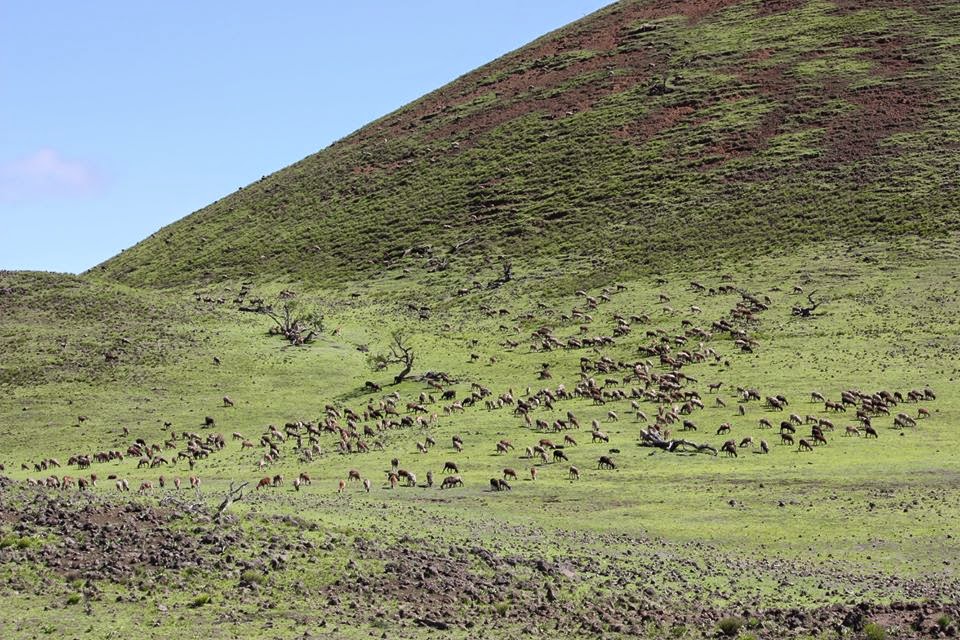 The End of Hawaii Wild Sheep

The future for heritage free-roaming sheep on the Big Island of Hawaii hangs by a thread. These unique descendents of livestock deposited by Captain George Vancouver in 1791 are under pressure.

Upon release the sheep readily adapted to conditions – by 1937, 40,000 sheep were reported on Mauna Kea feeding on mamane forest. Over-grazing of this unique habitat compromised numbers of the small native finch, the Palila bird. Influential USA mainland-based environmental group, The Sierra Club lobbied for decisive action. In 1979 they successfully obtained a court order requiring state action for the removal of all non-native sheep and goats from The Big Island.

Their adaptability to the islands has put these animals at risk from government agencies charged with preserving native flora and fauna. Native Hawaiian groups who traditionally hunt these Hawaii Wild Sheep for sustenance resent government interference.

It hasn’t helped the cause for non-native sheep and goats that their grazing has brought about a range of invasive plants, like fireweed and fountain grass replacing existing native flora.

Ironically, the resultant undergrowth is now a severe fire risk, kept in check by the same non-native sheep and goats that historically helped establish invasive weeds in the first place. The damage is irreparable in some areas.

Many native Hawaiians on The Big Island have relied on these sheep since the early 1800’s. In fact, King Kamehameha sanctioned the import of sheep, goats and cattle because he judged them as a long-term resource to feed hungry Hawaiians. Early on these animals enjoyed “Kapu” – royal protection from hunting in order to become established.

However, by the time Kapu was lifted 10 years later, damage to the environment was substantial and drastic measures had to be taken to cull various non-native livestock, particularly wild cattle that overran The Big Island.

For the past 200 years Hawaiians have engaged in sustainable subsistence hunting to harvest protein from these Hawaii wild sheep. The cost of imported meat is prohibitive for many Hawaiians living in the backcountry – often on minimal income.

Today native Hawaiians fear losing this natural food resource due to government mandated controls causing deep divisions within the community. Culling of sheep and goats continue with marksmen aboard helicopters leaving significant numbers of carcasses to rot where shot. Officially the meat is often designated non-salvageable.

As heritage sheep numbers now reach critical levels there is a new urgent need to manage and conserve the few remaining early settlers in a different manner to the Mouflon sheep – a more recent introduction.

The threat posed by Mouflon to unique breed characteristics is highlighted by Dr Alison Martin, Executive Director, The Livestock Conservancy based in Pittsboro, NC: “The native sheep of Hawaii represent genetics found nowhere else in the world and many of their ancestral breeds have disappeared. They have evolved and adapted over an extremely long period to self-sufficient life in the Hawaiian Islands.”

Initially the two breeds did not comingle, but over time Mouflon hybrids bred with heritage animals compromising this true breed. Mouflon blood is now present in almost all non-native flock diluting the purity that stems from the original 1790’s arrivals that adapted and refined over past centuries.

The last few groups of these true heritage animals run a constant gauntlet of interference from Mouflon genetics. Culling as invasive species control, attacks by wild feral dogs, poaching and problems with Coccidiosis caused by unseasonal wet conditions all contribute. The stakes are high.

Given the issues Dr Martin said: “Where they (the hawaii wild sheep) conflict with conserving native flora and fauna, a management and conservation plan must be developed that also conserves the unique genetics of these livestock, for the sake of biodiversity.”

“The animals are a very big resource we have here and with the ridiculous price of beef and pork locally, it’s much better to go and shoot a naturally occurring, free ranging animal for food.”

On The Big Island, Hawaii’s Department of Land and Natural Resources (DLNR) enforce direct action to control invasive species with matched Federal funding by the United States Fish and Wildlife Service (USFWS). More recently there finally appears a genuine will on the part of DLNR to learn more about the remaining heritage sheep in working toward their preservation.

Kanalu Sproat, Wildlife Biologist, Division of Forestry and Wildlife with DLNR based in Kamuela, was recently granted funding to conduct research into causes of mortality leading to reducing heritage sheep population on The Pu’u Wa’awa’a Reserve, a traditional land management area or ahupua’a.

Forty rams and ewes will be fitted soon with GPS collars for a survival study. Their whereabouts will be uploaded twice a day, every day via satellite to the DLNR website.

Mr Sproat added: “It’s not real time but pretty close, if the collar stops moving and there’s a mortality, technology will allow an email to be sent with coordinates of the animal’s last known position. We can go out and record cause of death and include that in our survival analysis.”

To help discover their origins using DNA profiling, blood samples will be taken when collaring the animals. Sproat commented: “We already have frozen tissue from the ears of harvested sheep awaiting examination.” He concluded: “There wouldn’t be a problem with some of these sheep being moved to a more secure environment.”

This potentially good news is tempered by the fact the clock is ticking for the remaining heritage sheep on The Big Island of Hawaii. The disappearance of these animals represents a loss not only to Hawaiians but also to the unique genetics possessed of Hawaii’s very own breed of sheep.