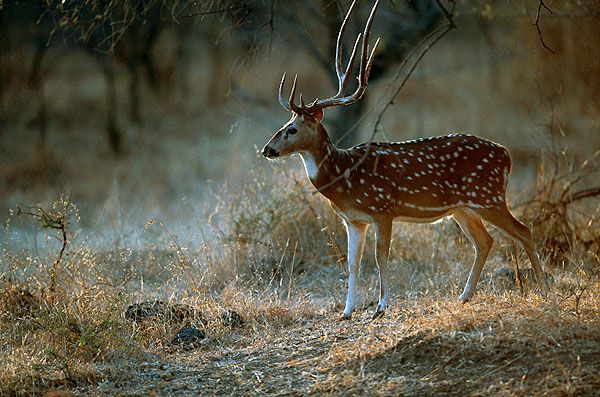 Axis Deer | The state Board of Land and Natural Resources on Friday will take up a proposal designed to help rid the Big Island of axis deer.

The proposal to be considered at a meeting in Honolulu calls for the board to declare axis deer to be harmful to agriculture as well as native plants and wildlife on the island.

The land board is also being asked to relax some of the hunting rules to make it easier to hunt the newly introduced herbivores.

The five-year plan calls for allowing licensed hunters in legal hunting areas to take as many deer as they want without obtaining a permit.

“This authorization would allow licensed hunters to dispatch deer on public and private lands without limitation on the number taken,” said the report prepared for board members by Department of Land and Natural Resources staff.

Currently in Hawaii, there is a limit of one deer per hunter per season on Molokai and Lanai where a prepaid tag is also required. However, an unlimited number may be taken on Maui where the deer have become major contributors to damage to farms and grazing land.

Maui helicopter pilot Tom Hauptman last month was sentenced to a year of probation after he admitted transporting three axis deer to the Big Island from Maui in 2009. He also has to provide 500 hours of helicopter service battling the spread of invasive species as part of his punishment.

The state in April began using sharpshooters trained on Molokai to hunt deer on the Big Island. The first deer was shot that month and two more have been killed since, the DLNR said.

The staff report said that while the Big Island deer population is believed to be less than 100 animals, the numbers could grow quickly. A group known as the Big Island Axis Deer Project, a collaboration of the DLNR, University of Hawaii and the Big Island Invasive Species Committee, has analyzed the deer’s reproductive rate and estimated that their numbers could increase by 30% each year.

The report said the rapid spread of axis deer across a variety of habitats and elevations on Maui supports that concern.

The report said the staff needs the public’s help eliminating the threat.

“Successful elimination of deer from Hawaii Island is expected to require a considerable investment of public resources and the department wishes to encourage licensed hunters to assist in the effort …,” it said.

It said that not only are the deer “voracious browsers” of crops, foraging grass and forest plants – and have been observed eating fruit and vegetables – but their hooves also contribute to erosion.

Maui County has estimated that the deer have caused more than $2 million in damage to agriculture over the past two years, despite $1 million spent on their removal from ranches, farms and resorts.

Based on Maui’s situation, UH researchers have estimated the potential impact to agriculture on the Big Island from the deer at more than $8 million annually.

Motorists in many mainland states know that collisions with deer are a very real possibility, especially at night.

An annual listing compiled by the State Farm insurance company indicating where the threat is the greatest shows Hawaii at the bottom, with a 1 in 6,267 chance of it occurring.

Hawaii was one of only four states where the odds were in four figures, with Arizona the next least likely at 1 in 2,063. With odds of 1 in 53, West Virginia was the state where a deer collision is most likely.

The State Farm map only refers to collisions, and doesn’t say whether that’s on roadways.

Either way, as reported Tuesday by Maui Now, a Maui man has bucked the odds.

The 45-year-old Kihei man was hospitalized in serious condition after his ATV collided with a deer in Wailea.

The man was wearing a helmet but sustained chest, arm and leg injuries when his vehicle rolled on top of him following the collision on Monday morning.