Hawaii Bowhunting Sheep Rodeo | POHAKULOA TRAINING AREA, Hawaii — On Saturday, December 1, 2012 about 85 volunteers met in the chilly early morning to help clear the installation of the wild sheep that roamed the post and Bradshaw Army Airfield.

For the last several years approximately 180 wild sheep have moved about the installation and airfield, eating the sparse vegetation and presenting a nuisance.

The sheep also posed a significant safety hazard to the airfield where they grazed in herds of 30 or more. 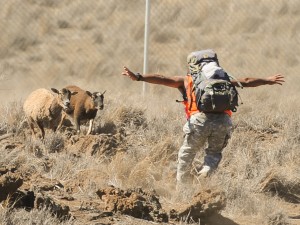 During the sheep round-up at Pohakuloa Training Area one brave volunteer tried to prevent these sheep from escaping to freedom. Photo by Bob McElroy/USAG Pohakuloa Public Affairs

Sheep on the runway impeded flight operations and their grazing has left bare, dusty ground behind. Aircraft taking off or landing stirred the dust and caused brown-outs which effectively blinded pilots.

The plan was simple: spread a moving line of volunteers across the post to flush and then drive the sheep toward the airfield and into corrals. The next step would be to move the captured sheep to the Keamuku Maneuver Area, a 23,000-acre tract of land on Pōhakuloa’s west side.

The day began with a briefing on how the sheep drive would unfold and what was expected. The volunteers were broken into teams led by a line leader. A drive boss led the effort on the ground and coordinated the movement of each team through the line leaders.

The teams lined up along the fence on the east side of the post and began the slow walk toward the airfield corral, about two miles away.

As the volunteers moved slowly through the post several Marines training here looked at them curiously and asked what they were doing. When told, the Marines nodded, amused.

The drive through the cantonment area didn’t chase many sheep but one leaped over the head a young volunteer, startling her and amusing her family and fellow volunteers.

The group swept down roads and around buildings to flush any sheep hiding there. When the cantonment area was cleared the volunteers broke for some water and snacks and a chance to rest. 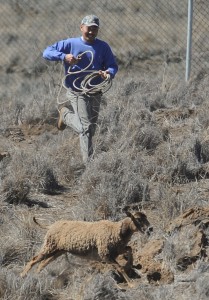 Hilo bow hunter Kelly Muranaka was one of the volunteers who rounded up sheep at Pohakuloa Training Area on Saturday (Dec 1). Here Muranaka tries to rope a sheep trying to get away. Photo by Bob McElroy/USAG Pohakuloa Public Affairs

The next part of the drive was more challenging as it crossed rough, dusty terrain filled with skeletal trees, clumps of dried grass, low shrubs and chunks of lava.

As the group neared the airfield one of the four-wheelers flushed a herd of about 20 sheep which ran nimbly across the rough terrain and onto the western end of the airfield.

The four-wheeler turned and raced back to the drovers who continued their slow march toward the runway and the sheep who gathered there.

The volunteers flushed more sheep and soon a large herd raced about in front of them searching for an opening in the line but there was none.

As the drovers closed the distance and half of the line swung toward the herd while the other held position to encircle the sheep.

Suddenly the herd broke into two and each raced in opposite directions to escape the encirclement.

The volunteers tightened the lines and ran toward the sheep shouting and waving their arms. Frightened sheep charged toward some of the volunteers, leaped past outstretched arms or ran around them to freedom.

But the volunteers persisted and prevailed and drove about 60 sheep into the temporary corral the Hawaii Division of Forestry and Wildlife set up west of Bradshaw.

Another group of volunteers drove about 70 sheep out of a side gate and into the training area.

Hans Sin, a wildlife biologist at DOFAW, said that his crews relocated the corralled sheep to the Keamuku Maneuver Area Sunday morning Dec. 2.

“The idea is to establish a population there,” Sin said. “We’ll have to monitor it for at least a year to see how it grows.”

Sin said he and DOFAW were happy to work with Pōhakuloa on an important health and safety issue like the sheep round up and excited to work with the garrison on long-term game management.

“We’re also enthusiastic about working with the Army on a long-term Cooperative Game Management Agreement for the Keamuku,” Sin said.

Shwedo said that there are some sheep remaining on the cantonment area and airfield. DOFAW will move them into corrals and relocate them to the Keamuku in the next few weeks.

After the sheep drive was over the dusty, sweaty, tired volunteers returned to the Pōhakuloa Community Activity Center for lunch, drinks and rest.

As the volunteers ate and relaxed Shwedo thanked them for their hard work. He also thanked the local hunters who participated in the round-up.

Two of them, Isaac Williams of Kona and Kelly Muranaka of Hilo said they decided to participate after meeting Shwedo at a hunter’s meeting at DOFAW in Hilo on Nov. 12.

“He (Shwedo) told us about this and said he could use our help so I came out,” Williams said.

Shwedo said he was extremely pleased with the sheep round-up.

“We pushed or penned about 130 animals today out of about 180 on the airfield,” Shwedo said. “This was well worth it, thank you. You have helped us immeasurably; you may have saved a life on the airfield today.”